You can recap on the whole Rock Art Series HERE — a page dedicated to the process of bringing this musical art collection to life.

Whoa.  This painting was a difficult one to physically manifest.  Just when I thought that the Pink Floyd Rock Art painting had done my nerves in, this one came to slam dunk me in a vat of excrement!

Not only did this piece take me close onto 3 months to complete but I felt like I was resisting finishing it right up until the last moment.  In hindsight, I think I know why…

Before I get into the personal details of my past-life drama karma (yes, you read right, this painting started ripping into my own akashic records — how riveting!), I want to go through the emotions that came up for me whilst painting this and, of course, reveal the painting itself.

*Drum Roll* — here is the painting and below you’ll find the list of emotions. 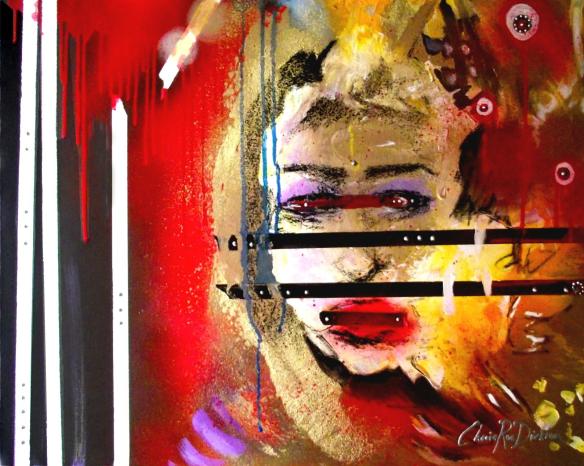 Phew! Now you might start to get a clearer picture of why I struggled through this process.

Firstly, I have to say that I absolutely love and admire the sexy and sassy Skin (lead singer of Skunk Anansie) and the entire band — bloody (no pun intended) brilliant music!

I’m going to scatter a few YouTube videos in this blog.  So — if you aren’t familiar with this Brit band — you can get with the programme.

Skin has an awesome voice and an enormous stage presence.  I was lucky enough to see them when they were in Cape Town — well over a decade ago now.

However, this Rock Art Series is diving deeper than audio enjoyment, humming a happy tune or head-banging.  This series is pushing past aesthetics and striking at the core — the emotions/energy behind the music (as interpreted by me). 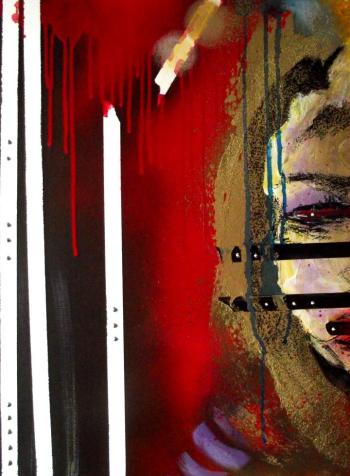 So, the strong emotions/feelings that I was picking up on was a dangerous kind of love, or should I say, a conditional love.  A love that is incomplete and destructive because it’s missing one fundamental principle — self-love and respect.

Possessive relationships are doomed.  You enter into them incomplete and want the other person to fill the void inside you that can only be filled by, you guessed it, YOU.

Instead of looking within to find the answers, we look without and turn on the one we love with a deepening resentment, sorrow and a pain that can’t be quenched.

Long and short is:  You can’t truly love anyone else unconditionally if you can’t totally and fully accept and love your self (self love is not to be mistaken for ego-based love or narcissism).

My Part in This Epic Blood-Stained Musical Dramatization

The anger and frustrations that came up for me were almost unbearable.

I have a current marriage made in heaven (yeah, I know — lucky me.  You can read all about it HERE) but with the deep retrospection I had to undergo, I realized that I had to face a past relationship.

Such a far flung past coupling that it comes from a different lifetime altogether.

It was difficult to go through this in the ‘dark’ (i.e. not quite knowing the in’s and out’s and just going on gut instinct) but I had dreams that helped me along and let me pick through the metaphors of literally having shit dumped on my head by this phantom past partner.

In another dream I also displayed signs of stigmata and bleeding from every orifice while he looked at me and said, ‘Go clean yourself up!’.  The most bizarre thing is that he was being cut and I was bleeding which I found to be quite a remarkable analogy.

Ripley’s Believe It or Not

When I was compiling the video’s for this blog, I realized that it was the first time I had ever seen a Skunk Anansie music video.  I have only seen them live and on live performance DVD’s. So, it goes without saying, that I was quite shocked to see that the above and below video were very in sync with the painting style, theme and colours.  See for yourself…

The Phantom Menace Was Me

Who was this past-life persona?

It doesn’t really matter.  The details are mere semantics, what was more important was my understanding of what was being brought up in myself.  The ‘people-pleaser’/’don’t rock the boat‘/‘take it up the ass‘ person in me just had to go.

What I got from my ‘past life’ scenario was a sense of being out of control in the relationship but not being strong enough to leave.

I felt oppressed, spoken down to, controlled, literally ‘shut up’ (emotionally and verbally — which is why I think there are bolts in the painting — keeping ‘her’ in place; tape over her mouth and eyes — keeping her gagged in silent pain) and made to feel deep guilt whenever I did pluck up the courage to have my say.

Although, all she/I had to do was step into her/my power and say, ‘No more’ and walk away.  She/I displayed signs of being weak (and, yes, Skunk Anansie do have a song called ‘Weak’...LISTEN/VIEW HERE) and not loving and respecting herself enough to walk away.

This all boils down to self-inflicted trauma.  The inability to stand in ones power and to have enough self-love to pick up and leave a rotten situation.  This is a dangerous love — fear disguised in the wrappings of ‘love’.

The Mysterious Identity of the Unknowable Known

Other things I noticed at the end of this process was that the ‘face’ had smeared lipstick, undeterminable eyes, skin colour or race — she could be anyone from anywhere.  She could even be a man (well, maybe one in drag or from a pantomime?).

Another interesting fact is that I picked up the colour purple right at the end and dabbed some of it onto the eyelids, face and a few streaks at the bottom.  Could this be a form of mitigation?

Purple is usually connotated with good judgment and spiritual fulfillment.

I Open at the End

Well, Skunk Ananse, thanks for opening a wound that needed to be scraped clean.

Even though I’m still in the process of releasing and realigning to this new found truth, I am grateful to have had the opportunity to actually live through one of my paintings and seek out a deeper personal truth to this collection.

Below are photographs of the painting process:

‘A Dangerous Love’ by Cherie Roe Dirksen
28″ x 22″ x 1.5″
Acrylic and Mixed Media on Boxed Canvas
Click on the picture to take you to the print store.