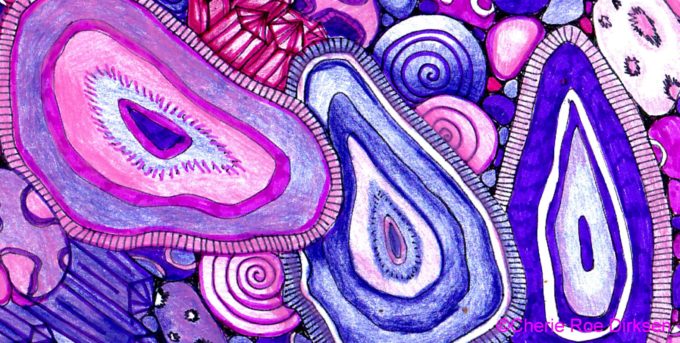 I’ve been coming up against a very oppressive type of ‘authoritarian’ energy lately.  I am also seeing my friends and family going through similar experiences, so, perhaps you’ve been feeling it too?

Authority normally scares the crap out of me but I’m going to let you in on how I’ve been dealing with it this week (and quite effectively I might add). But first, allow me my rant…

The End of the Webbed Romance?

There’s a lot of bullying going on.  I’ve been hearing about Facebook taking down business pages left, right and center with no warning or notice — I really feel for the people left in this wake with no explanation but an automated response and no way to effectively contact the ‘untouchable hotshots’.

I hear that YouTube is also exercising their right to do as they please and people are losing income streams thick and fast.

My Yahoo mail account wants me to consent to having them poke around/share all my private info or my account gets taken away. What’s next — micro-chipping wrists or you can’t access your bank account? How very 666 of you, darling!

Cheers! Thanks y’all, it’s been real (ummm…cyber-real which isn’t very real at all now, is it?).

And All Pinocchio Wanted to Be Was a Real Boy

We did without these social platforms for most of our lives (barring the millennials) and we got on great.

The way I see it is that all these big social media sites and companies are helping us to let go and go do real things in the real world like the real people we are.

They may not know it but all the BS, all the privacy violations, all the unacceptable terms and agreements may actually be steering us back to our humanity — or at least allowing for a pause so we can come up for air and take a look around. Who knows, maybe some of us won’t bury our heads so easily anymore.

Technology is fun but too much of it can suck the life out of us and rob us of quality moments. I promise you there was life pre-internet and there will be life post-internet.

As my paranoid, suspicious mind flourished in light of all the injustice, I remembered:

Life is meaningless until you assign it meaning (either neutral, positive or negative).

I decided to alchemize it and set forth to visualize my preferred outcome. Read related article: Why ‘The Echo’ is Important on Your Evolutionary Path

Here’s my advice if you feel a little snowed under with negative, oppressive energy:

Go sit in nature and ground yourself. Read related article: How to Use Your Heart Wisdom

Whatever is happening can be alchemized — alchemy is turning base metal into gold and you can turn any situation into gold when you mine it right.

When I looked at my circumstance from a different perspective I realized that all was indeed well.  I couldn’t be happier.  I’m going to be like Fernando and sit under a tree smelling the daisies and enjoying this beautiful playground of a planet.

Are You the Common Denominator?

The Art of Not Thinking

Cherie posts a new article on CLN every Thursday. To view her articles, click HERE.

This article (Remember: You Can Alchemize Anything!) was originally written for and published by Conscious Life News and is published here under a Creative Commons license with attribution to the author Cherie Roe Dirksen and ConsciousLifeNews.com. It may be re-posted freely with proper attribution, author bio, and this Copyright/Creative Commons

“For we are opposed around the world by a monolithic and ruthless conspiracy that relies primarily on covert means for expanding its sphere of influence.

It is a system which has conscripted vast human and material resources Into the building of a tightly knit highly efficient machine that combines military, diplomatic intelligence, economic, scientific and political operations.

Its preparations are concealed, not published. Its mistakes are buried, not headlined. Its dissenters are silenced, not praised.” — John. F. Kennedy

This is a segment of a speech given by John. F. Kennedy in 1961 that is the opening of Muse’s new song, Defector.

Rocking Out the Shadows

Albeit that JFK was aiming this at the Russians and the Cold War, this speech rings true when one associates the words with the ‘shadow government’ of today — wielding it’s blatant agenda whilst rubbing our noses in it.

Okay, I’m a big Muse fan and absolutely fell over myself when I listened to this new track — I was galvanized to the point of dropping everything to run off and join that infamous group, Anonymous, or see if Russell Brand needs some pro bono admin staff.

The song is about the unremitting human spirit, our freedom that is being sorely compromised and the independence we so richly deserve (if you haven’t heard it already, I will have the YouTube link at the end of the blog — I dare you to not jump out your seat and wave your freedom flag about whilst listening!).

Muse has hit the nail on the head, yet again, with this tune that incites one to take a stand against the tyranny of the powers that be.

So what does it mean to be a defector?

The shortened dictionary definition is a person who abandons another person, state/country, cause or doctrine to which one is bound by some tie (as of allegiance or duty).

I so want to be a defector!  I want to stick it to the man.

I’m sick of hearing about stories of police brutality, corporate and government corruption, Monsanto poisoning our food, fluoride in our water dumbing us down into passivity and confusion, lies being fed to us through the media and all the rest!

We’re supposed to elect the government to serve us but all they do is serve themselves and the greed of the corporate agenda.

We pay the salaries of the police to protect us but they turn on the very citizens that pay their wages.

So what can the man on the street do to defect without having to join some covert mission or underground group?

I was listening to an Australian radio presenter the other day (can’t remember his name unfortunately) and he said something that really struck a chord.

He was talking about recreating a sense of community where people can discuss issues and find solutions like they did it the golden days of yore — when they had something called a ‘town meeting’.

Bring back the town meeting, for lords sake!

He quite rightly went on to say that since we allowed TV’s into our homes, we generally abandoned getting together and discussing better ways forward due to the impression that the TV was giving us all the news and current event updates we needed.

If only we cottoned onto the fact that the media weren’t exactly always telling us the truth, the whole truth and nothing but the truth.

Give Me the Good News!

Okay, to cut a long rant short — the good news is that we can still take back the power.  That’s what this whole ‘awakening’ is about, right?

The more aware we are the more we can act and do something about the pickle we find ourselves in.

Just this morning I awoke to find 2 really great news stories — it starts to slowly restore ones faith in humanity and the power we, the people, truly have. Let me share them with you (their headings should clue you in as to what they’re about even if you don’t want to read them):

History Has Been Made. Female Genital Mutilation Banned In Nigeria

Change starts one person at a time, one cause at a time and we should try to find solace in even the smallest arenas of positive change.

If you can ignite a fire in your community and start to get to know your neighbors and fellow townies, we most definitely will find our voices again and bring about a new paradigm on this planet.

Yup, it may not happen tomorrow but all the small success stories will eventually turn into an avalanche of human metamorphosis — a recasting of civilization as we know it.

Now, as promised, lend your ears and eyes to Muse’s ‘Defector’ and be prepared to be blown away!

Words of Wisdom From Matthew Bellamy

The Resurrection of Muse — Rock Art Painting no. 7 Photographs