I just want to express from the get go that this has been one of the most difficult paintings for me to bring into manifestation.  I started off this journey with hopeful optimism which soon turned into pain, anguish and avoidance.  I literally avoided my painting for weeks before returning to finish it.

I even manifested back pain (like there was something I needed to ‘get off my back’) which was a real poke in the ribs to complete this.

Firstly, the emotions that I wrote down (on the side of the boxed canvas) during the painting process were as follows:

Our Hopes and Expectations

It began with me spray painting the black hole in the center which represented a void.  Emotions getting sucked into a black hole.

Then I painted little white orbs emerging which I think was indicative that there is and always was hope and a presence that was watching over us (or perhaps it was the light in us) through the whole distortion of life, morality and ethics of the war.

The male painbody came out big time after that and I was aware that I was entering the murky dark waters of the emotional minefield of all our soul brothers (and sisters) who were forced to go to war.

They were both involved in WW2.  My maternal Grandfather was a RAF pilot and was shot and killed in German territory — he was in his early 20’s.  His body was never recovered and I don’t think his wife ever recovered either.  This obviously impacted my mother and her sisters greatly.

My paternal grandfather was stationed in Egypt and, thankfully, made it back home in 1945 although he never spoke of his traumas.  I never got to meet him as he died before I was born.

I think a lot of men shut down and never spoke of their ordeal when they got home.  Can you imagine the pain and suffering this has caused?  The ripple effect is felt in Pink Floyd’s music.

After the void showed up in the painting, I went ballistic with silver foil.  After I had finished pasting this onto the picture I picked up my red spray can and viciously started gunning the canvas with bullet holes.  I felt like I was being sucked into the overwhelming emotions of limitless killings — voluntary and involuntary.

It was a very dark place.

The muddy paint (which was done using a kind of clay/sand textured acrylic) represented being in the trenches.  I even stuck ‘notes’ on the painting reciting the Ho’oponopono (a Hawaiin prayer for forgiveness and an amazing releasing affirmation for letting go of the past so you can move into the present).  I even spontaneously wrote out one of these notes on toilet paper.

I am sorry, please forgive me, I love you, thank you.

I stepped back from the painting and even though it wasn’t physically there, I saw a massive yin and yang sign in that void.  It was energetically present.  This confused me.  I thought this painting was going to be about the male painbody.

It was, however, morphing into something else…

The Pinnacle Rent of the Sexes

I began to go into another state, I could feel the feminine energies coming in through me.  I picked up a pink oil pastel and started smudging it over the bullet wounds and blood.  It was as if I was tempering the pain.  The colour pink represents passivity, calming and softening.

It then struck me.

This is not only about the male painbody but it also involves the female painbody.  The war was like the symbolic peak of the separation of divine masculine and feminine.

Men come back from war shut tight as a clam and the females make them a cup of tea and offer a biscuit.

Can you see how this was split apart during the war?

Men came back having had their minds, limbs, spirit and morals blown apart. It was not appropriate in that time for men to show weakness or, God forbid, emotion.  So they contained themselves.

Women were in complete avoidance.  They probably didn’t know how to handle the enormous magnitude of the war effects and the atrocities their men had witnessed and been a part of, so they swept in under the carpet.  Women became the Stepford Wives, fudging the emotions and avoiding the topic at all costs.

Neither sexes were in their integrity.  They were doing a dance in the void — the ultimate tango of avoidance.

I felt a distinct animosity for women in Pink Floyd’s music.  The feelings were that of women being superficial takers, opportunists and cold fish.

There was also a part at the bottom of the painting that seemed to portray the education system.  How we are moulded into little nuts and bolts to keep the cogs turning.

I was even compelled at one stage to leave my studio (almost in a trance like state) and go down the staircase.  I thought I was going to get some newspaper but it turned out that I was collecting a sketch I had done about 2 years ago to demonstrate Platonic Solids to a friend.

The book I had drawn it in was lying on my dining room table.  I opened it straight at this picture (the book is also the kind of hardcover we used at school with the red margins and blue lines) and ripped it out, marched back upstairs and pasted it to this section of the painting.

I also noticed that I had written one of my articles at the back of this piece of paper and it had relevant wording that I also ripped out and glued to the canvas.  I even automatically made a tiny paper aeroplane and stuck it to the picture.

Could this be indicative of childhood fancies — making planes at school, fantasizing about being a pilot?  Then stepping out into the real world and being disillusioned by being a traumatized ‘fighter-pilot’ slipping into the void.

Then the Seeds Started to Grow

The theme of this painting is very sad indeed.  The tearing apart of the sexes, the war wounds, the fudging over of emotional debris by our parents and their parents but there is a distinct message of hope.

I stood back and looked at the painting.  It needed green.

I couldn’t quite think of where and what to add that was green but the Universe knew.  I ended up painting vines and leaves growing up out of the chaos.  A symbol of hope and growth from bad experience.

Don’t Let Your Privates Deceive You

It was like all this war, disruption and chaos was leading us to heal the rift in ourselves.  As you know, we are both yin and yang, masculine and feminine — no matter what your genitals tell you.

We are coming to a point in time where we are realizing this and balancing our energies.  Embracing both in order to lead lives of fulfillment and acceptance of ourselves and each other — unity consciousness.

“We would meet again, some sunny day”~ Vera, Pink Floyd

Thank you, Pink Floyd, for the opportunity to unravel this important historical and emotional piece of art.

The Can of Worms is Closed!

This painting showed me the rift in the feminine and masculine energies — the breakdown of balance between yin and yang.

Then it moved to rectify the tear by bringing back the balance of both polarities.  This artwork showed me that there is hope for us, that we can mend our broken hearts and bring divine balance back into the world through love, compassion and forgiveness.

“All alone or in two’s, the ones who really love you walk up and down outside the wall.
Some hand in hand and some gathered together in bands, the bleeding hearts and the artists make their stand.“

~ The Other Side of the Wall, Pink Floyd

You can recap on ALL the articles in the Rock Art Series here:

The Grand Band Reveal is Today!

What Radiohead Looks Like Through The End of My Brush

Song Playlist — Radiohead Albums That Made The Art

The Secret to Excellent Living

The Fine Balancing Art of Yin and Yang

The Shocking Truth About Gender Equality

To recap on Painting no. 2 — The Beatles, please CLICK HERE

To recap right from the conception of the Rock Art Series, please CLICK HERE 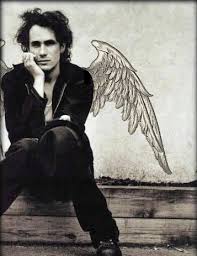 Hoorah!  I’m back in the saddle with my Rock Art Series.  It’s been a while since I’ve been back in the studio, what with the festive season and Armageddon ‘n all…it was a truly exhausting experience but it’s real good to be in the creative zone once again.

2013 has kicked off with the sweet and tantalizing sounds of that angelic crooner, Jeff Buckley.

Boy, did this one take me by surprise but I’m not going to reveal all the juicy details in this blog.  No, I’m going to make you wait until next Tuesday’s Art Blog before I reveal all the in’s and out’s of this painting — what made me tick, why it’s dripping with emotion, why I felt the urge to passionately attack the canvas at one point and a visitation by something out of this world?!

Whoa, the excitement!  But on with the show.  Here is the pictorial painting process (alliteration at it’s best):

And, finally, voila…here is the end interpretation of Jeff Buckley’s music:

Prints are now available in all shapes and sizes, click on the picture to take you to the print store or ENTER HERE.  Art that is accessible to everyone — there is something to fit any pocket, from postcards @ $2.23 to prints starting from $12.60.

Click here to see the next installment:  How I Got Raw With Jeff Buckley